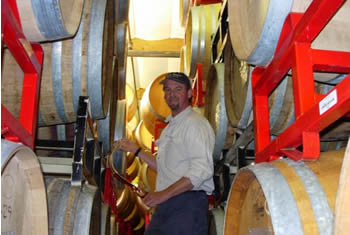 2005 was a beautiful harvest period as brix climbed very slowly after a short heat spike in early September. This allowed me to pick four small lots spread over a three week period from mid September to early October without having the later lots get too ripe. The range was from 23.5 to 27.0 brix with the average around 24.5 brix. The point of picking at multiple ripeness levels was to probe for different flavor profiles in an attempt to better understand what this vineyard really wants to produce. It also falls in line with my general preference for handling the fruit in as many different ways as possible in an effort to highlight multiple aspects of the fruit. What I really hoped to find was a peppery streak, some meaty qualities and maybe some blacker fruit. The lots were fermented and barrelled separately before being combined at the six month point. In the end, I had to conclude that this vineyard might not produce a real pronounced pepper element at any ripeness level. I did feel that the later lots picked up a darker character--maybe a little tar and anise. The dominant fruit remained boysenberry at every ripeness level, but it was a more clearly pronounced feature of the early lots. Later lots featured the broader, more plush mouthfeel that is a predictable result of their lower acidity and higher alcohol.

Even with the last picked lot, I didn't get stems that I felt could be included in the fermentation. I would like to achieve brown stems that can be incorporated into the fermentation. When ripe stems are fermented along with the grapes (aka “whole cluster fermentation”) they can lend some spiciness to the wine. When stems are green they just impart a vegetative note (tomato, in the best case) and harder tannins. With a young vineyard, the fruit will usually ripen ahead of the stems, and it is starting to look like this is particularly true of the newer French clones of Syrah. So we picked without waiting for the stems to catch up. I had entertained the notion of picking a superripe lot after the main harvest, destemming it, throwing away the grapes, and adding the ripe stems during the maceration of the main lot. When I went back to the patch that I had left in the vineyard for this purpose this year, however, it had been too worked over by birds that had left pecked and dried out berries that would not come off in the destemmer. These berries would have contributed an innoculum of lactobacillus, pediococcus and other nasty bugs that the main lot didn't need. So much for that idea.

I hauled each lot down to Starry Night Winery in Novato (my host winery) and destemmed the grapes into small fermentors (half ton and one ton bins). Out of habit, I cold soaked the first lot for five days using dry ice to hold the temperature around 55 degrees. The purpose of the cold soak is to extract some of the softer, fruitier components from the berries prior to the onset of fermentation when heat and alcohol produce a less selective extraction yielding more tannin. Based on the previous year's experience, however, I knew that I would let all these lots undergo extended maceration after primary fermentation in an effort to extract everything the grapes had to offer, including some extra tannin. Since I wasn't going to try to be selective about extraction with the Syrah, cold soaking began to seem pointless and I have abandoned it.

I treaded/stomped the grapes twice a day for the first several days because the toughness of these particular grapes’ skins means that they don’t otherwise yield enough juice coming out of the destemmer to actually soak the skins. The separate lots with Assmanshausen, D-80, D-254, D-21 yeast strains. During active fermentation, I punched down the cap two or three times a day depending on temperature and the pace of the ferment.

Most of the 2005 vintage was allowed to run up to relatively high peak temperatures of about 93 degrees in an effort to bring out meatier bass notes and tannic structure. One fermentor was kept to 86 degrees to contribute finer aromatics. An added benefit of hotter ferments in open top bins is that they tend to blow off a little more alcohol than do cooler ones. Still, this fruit’s aromatics are a strong suit, and I expect that I will keep about half the lots in each vintage to cooler temperatures in order to preserve that quality.

Grapes from this vineyard need extra time on the skins because they are so slow to yield their contents and they can handle extended maceration because the tannins are very soft. During the post-fermentation, extended maceration period, the fermentors were punched down once a day until the cap dropped (the skins stopped floating to the surface due to trapped carbon dioxide). In order to protect the must from excessive oxygen contact after alcoholic fermentation has stopped producing carbon dioxide (which blankets the surface of the must), I innoculate with malolactic bacteria in the fermentor. The main function of this secondary fermentation is to transform malic acid to softer lactic acid, but this process also produces carbon dioxide to protect the wine during extended maceration. I ended up holding the 2005 in the fermentors for 30 days before pressing.

Beyond extraction, the point of extended maceration to build volume/structure in the wine. The trajectory of extended maceration seems to be that the wine tastes pretty good in a fruity way after about a week on the skins, goes to hell in a hard, thin way after a couple weeks and comes back around as a fuller version of the earlier wine sometime after three weeks. The key is not to panic and press the wine off when it starts to go south and to wait it out until it has rebuilt itself. It is generally thought that the process of binding tannin and color molecules together is facilitated by skin contact, though I've never heard a clear explanation of why this should be. Recently, I heard the explanation that what is really going on during extended maceration is that the dead yeast are spewing out mannoproteins which effectively perform an early tannin fining of the wine.

After 30 days on the skins, the wine was pressed lightly, just to the point where wine coming from the press starts to thin out. Free run and press fractions were pumped into the same settling tank. After a little less than a day, the wine was racked off of the gross lees (solids that settle out of the wine) into barrels. Of the ten barrels, four were new and seven were French oak. The lees were stirred in the barrel weekly for the first four months. The wine was racked twice and filtered before bottling in February 2007.