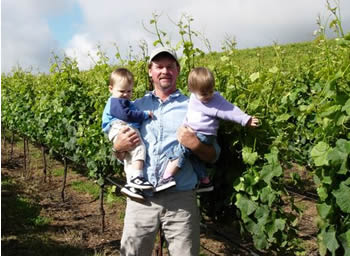 Our Sangiovese comes from a 4 acre vineyard on my Mom’s Reward Ranch property in Amador County in the Shenandoah Valley of California AVA. Shenandoah Valley is in the Sierra Nevada foothills (south of Placerville and north of Sutter Creek). This vineyard is at about 1500’ elevation with rolling hill topography.

Daytime temperatures are warm. It is often in the nineties during the summer and we get spikes above 100 degrees several times each year. On the other hand, cool nights are the norm due to both the elevation and to breezes flowing up from the Delta. The wide diurnal temperature shifts produce ripe fruit balanced with good acidity.

Most of our neighbors grow Zinfandel, for which the Shenandoah Valley is best known. My Mom’s vineyard is Sangiovese which we planted in 1995 at the behest of our neighbors at Vino Noceto, who bought all our fruit for years. More recently, they have cut back on purchased fruit, and some of this vineyard's production became available for my use.

I began prepping this vineyard during breaks from school in the early '90s. The first order of business was to rip out an enormous amount of rock, mostly in the form of VW sized granite boulders that would otherwise have made trenching, planting and cultivation impossible. All the rock in this vineyard is distributed throughout the deep, iron-rich, granitic, coarse, sandy loam topsoil. Unlike a situation in which bedrock forms a continuous layer below the topsoil and acts as a barrier to root penetration, the vines (if you can get them in the ground) love growing around the boulders deep into this very fertile and well drained red dirt.

We chose a semi-drought resistant rootstock, 110R, for grafting. The downside of drought resistance is usually abundant vigor, and I probably wouldn't make the same choice over again. Sangiovese, by itself, tends to be vigorous, and pairing it with a vigorous rootstock on vigorous soil was a bit much. It's taken 20 years for this vineyard to shed it's youthful exuberance and settle into a more manageable middle age.

The vines are cordon pruned, and we train the shoots up through the wires of a vertically-shoot-positioned (VSP) trellis. Now that the vines have calmed down, we don't have to do much hedging to maintain an open canopy. We drop some fruit to avoid crowding, but the vineyard has become pretty good at self-regulating to about 4 tons per acre.

I had planted another two acres of Syrah on this site in 2001. It was short-lived, however, as it came from the nursery with both a virus and a fungus. 2007 was the last good vintage for that block. As much as I had liked that fruit, I had had to pick the syrah in early September to avoid overripeness and the jammy quality I don't like. Reluctantly, I decided that this is a hotter site than suits the style of syrah I want to make, and I haven't re-planted that block.

The signature of this site, across both the Syrah and the Sangiovese, seems to be an iron mineral tang -- something it shares with a number of other Shenandoah Valley wines.